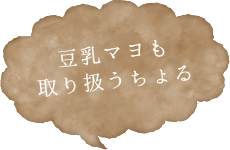 Yamaka soy sauce is not washed away by the changing flow of the world
Inheriting the spirit of our founding, we inherit the traditional manufacturing method and try to make products that are particular about domestic production.

Under the guidance of the Yamaguchi Prefectural Industrial Technology Center, we succeeded in developing a unique product called "whale soy sauce" through joint development with a fisheries school. Yamaka Soy Sauce pursues the development of next-generation products that combine the effective use of limited marine resources with health-promoting functions.

In the 5th year of the Meiji era, when Japan began to take the path of modernization, we started soy sauce production with a focus on creating flavors that are closely related to the local area.
In a turbulent world of the Meiji, Taisho, and Showa eras. , Inheriting the spirit of the founding, inheriting the traditional manufacturing method, we have been trying to make products that are closely related to the region.
Nowadays, it is widely used not only as a local Shimonoseki product but also as a "Kumiai brand" product at JA in the prefecture.

In Heisei, we started the production of brewed vinegar using agricultural products in the prefecture, especially fruits, by making the best use of the brewing technology obtained in the production of soy sauce.
Under the guidance of the Yamaguchi Prefectural Industrial Technology Center, we adopted a manufacturing technology called continuous brewing, which is unprecedented in Yamaguchi Prefecture, and acquired fermentation technology other than soy sauce production.
Not only from the perspective of creating tastes that are closely related to the local community, but also through traditional techniques, we are now able to produce foods that have unprecedented health-promoting functions.
We will continue to make diligent efforts to make everyone happy through the effective use of limited marine resources and the development of next-generation foods that have health-promoting functions.

e pursue a particular taste and provide customers with a delicious smile.

In the 5th year of the Meiji era, when civilization began, it started as a small soy sauce shop in a corner of Shimonoseki, which is said to be the birthplace of the Meiji Restoration.
Since then, we have been sincerely dealing with our customers and continuing to create tastes that are closely related to the local community while focusing on deliciousness and quality.

Japan has a culture that emphasizes taste and quality and pursues a particular taste. In keeping with this spirit of pursuing deliciousness, we will strive to improve quality and continue to strive to help as many customers as possible with delicious dining tables.

In recent years, with the guidance of a local research institute, I have also learned the fermentation technology of vinegar and fish sauce that can be accepted by the next generation. We are confident that we can grow by focusing on the development of seasonings that will please the younger generation and striving to improve quality while preserving old traditional techniques.

We will continue to be creative and ingenious so that we can provide delicious smiles to as many people as possible without forgetting our original intentions. We look forward to your continued support and guidance.